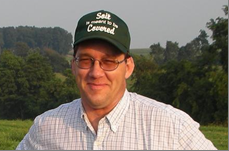 Jim and Marlene Hoorman reside in Hancock County, Ohio south of Findlay at Jenera, Ohio on a 40-acre farm. They have a 19-year old son, Jonathan who is attending The Ohio State University as a Sophomore majoring in Ag Business and Economics with a minor in Agronomy.  Jim has been working in agriculture and farming since he was 13 years old, first picking strawberries then working for Kleman Brother’s Farm as a hired hand.  Corn, Soybeans, Wheat, Hay, Tomatoes, Sugar Beets, Cucumbers and Sweet corn were major commodities along with hogs and cattle.  Jim attended Ottawa-Glandorf High School and was an honor student and active in 4-H and Boy Scouts.  Jim was also diagnosed as a diabetic and has lived with this condition for over 44 years, taking insulin shots and then being on the insulin pump for over 12 years.

Jim started college and worked at Ohio State University Lima Campus in the greenhouse and on ground maintenance.  He moved to OSU Columbus campus as a Sophomore and worked at the Swine Boar Test Station.  He joined Alpha Zeta Fraternity, became the treasurer in 1983 and was an honors student with a 3.49 GPA.  Jim was recognized as a Top Five Leader in the College of Agriculture for his work with the Saddle and Sirloin Club chairing the Farm City days which hosted over 2000 grade school students each fall. He graduated in 1984 with a BS in Agriculture.

Jim stayed at Ohio State University to get Masters of Science in Agricultural Economics and a MA in Business.  Before starting his Masters program, Jim took a Swine Internship for six months and worked in the Netherlands and England (South Hampton) on two hog farms in the summer and fall of 1984.  Jim started his first Winter quarter at OSU in swine genetics but quickly switched to ag. economics and business.  During graduate school, he participated in a 1 month long Agricultural Student Ambassadorship program traveling to England, France, Finland, and Russia with 50 other college students from the USA.  Jim graduated in 1987 with two masters degrees.

Since good jobs were scarce in the late 1980s, Jim spent two years selling real estate and being an appraiser in St. Paris, Ohio working for the Henderson Land Investment Company. Jim fixed up a cabin on Kiser Lake and lived there for about two years.  Jim supplemented his income by teaching a Marketing Course at Urbana College and a Finance Course at Heidelberg College. He then started as an OSU Extension Agent in Defiance which is when he met his wife to be Marlene Hageman on a blind date.  They got married 3 years later when Jim was 30 and Marlene was 28.  Marlene was a banker and worked in Findlay, then Defiance, and then several other jobs (now Edward Jones) as Jim progressed in his career.

Jim and Marlene were looking for the perfect farm to buy but it took a while. Jim started working for the Farmers National Company and they moved and rented houses short--term Wharton and then Bluffton, Ohio.  Jim invested in an 80-acre farm in Muncie Indiana and a 172-acre farm in Paulding County.  They eventually sold these two farms to buy their current farm, a 40-acre parcel with a lovely two-story brick house in 1995 out in the county between Jenera and Ada, Ohio. Jonathan was born in 2000 and became the focus many family activities including Boy Scouts (Eagle), 4-H, soccer, basketball, cross country, and track. Rabbits, chickens, hogs, goats, and even a few sheep have resided on the Hoorman farm.

Jim started working again for OSU Extension working with the Amish starting in 1997 through 2003.  Became interested in grazing and started raising dairy heifers and some beef for several years.  Put up a 56-foot by 120-foot barn to house the cattle.  Unfortunately buying high and selling low in the drought year of 2003 brought an end to the grazing operation.  After that the farm was hayed for several years before going back to no-till corn and soybeans and eventually cover crops.

Jim became interested in cover crops especially annual ryegrass in 2007-2008 to solve nutrient management problems in Mercer County and in Lake Erie.  While annual rye is a great cover crop, it also had some issues with termination and becoming a weed at least early 2000s.  Jim started studying soil health and started working on a PHD at OSU around this time.  Going back to school in your 40s is an interesting situation.  For one thing, when your older or as old as most professors and have actual farm experience, it creates a unique teaching situation.  One Professor said:  Jim I love having you in class, but you really slow me down with all your questions!  Another professor just always pointed to Jim when a farming question came up and said Ask the Extension educator, he knows.  I guess combining learning in class with real life situations has always been not only fun but practical!  Many of my fact sheets originated from the good professors and the good information that I learned at OSU that I felt needed to be shared with our farmers and was not being told through OSU Extension.

Five major fact sheets were written at this time including Biology of Soil Compaction, Understanding Soil Microbes and Nutrient Recycling, Sustainable Crop Rotations using Cover Crops, Converting to No-till using Cover Crops, and Improve Water Quality using Cover Crop.  These all became the foundation for several power point presentations and Jims major life work to promote long-term-no-till and cover crops and the basis for soil health. About this time, Jim started to become both a state, then national and even international cover crop, no-till, and soil health speaker.  Jim traveled to both China and Australia to be featured speakers on no-till, cover crops, and soil health in 2014.

After major back surgery in 2011 (felt like I was going to die), Jim moved back to Putnam County (both Jim and Marlenes home county) in 2012 to be an Extension Educator and Assistant Professor.  Jim helped start the Putnam County Soil Health Agricultural Research Plots (SHARP) site on 9 acres growing corn, soybean, and wheat on 20 by 200 feet plots using conventional tillage, no-till, and no-till plus cover crops. David Lamm, a national soil health specialist convinced Jim to leave OSU Extension to work for the USDA-NRCS as a National Soil Health Specialist.  Jim contributed by recommending changes to NRCS practice standards (Standard 590, Nutrient Management, and Standard 340 Cover Crops).  Jim also wrote and extensively studied slug and vole issues associated with long-term no-till and cover crops.  Jim wrote 5 vole and 5 slug USDA-NRCS fact sheets outlining biology, how to scout, natural predators, baits and repellants, and most importantly 25 ways to control slugs and voles in no-till and cover crop situations.  All these fact sheets are on this website.  Starting in October 2019, Jim had enough of federal government and now Jim, Marlene, and their son Jon start a new chapter starting their own business!